Pictures of (190 of a little over 400!) the flying Velocity fleet of aircraft. Check out the group for paint scheme ideas, or just find out who's plane you've seen. Moved to Paint Schemes

Below are links to cleaner drawings specifically done for use in manuals. The images are in a Microsoft Word document and can be copied, pasted and re-sized as necessary. The drawings can be used by anyone, as long as the author’s name is kept visible with the image. By the way, remember the intended use of these drawings (above). They were done over actual photographs of N541SW and factory drawings. They are not exact drawings. If you require exact (CAD-quality) drawings, these are not the ones to use.

I just returned on Friday from trip of about 2500 nm, including visits in Salt Lake City, North Dakota, and Boulder, CO. Plane worked great, engine ran fine – even at density altitude of 16,500 over the Rockies west of Denver. Typical cruise of 165 KTAS, and 9.5 ghp. (I like my 20B rotary). Had good weather all the way.

I learned that the standard Koch chart for runway requirement isn't a bit conservative for my airplane. Taking off from Boulder (4000 ft) with density altitude near 8000 ft and full fuel didn't leave much excess runway.

Rich has a ton of pictures on his excellent website, here are a few of my favorites.

I journeyed to Velocity to obtain my factory checkout. I trained with Nathan Rigaud who was thorough and extremely helpful. We flew in both the "Multicolor" Standard Velocity and the new XL FG trainer doing multiple maneuvers, simulated engine outs and lots to landings. It was an extremely useful experience and a LOT of fun! After I finished the dual required by the insurance company, I rode along on another flight and snapped some photos of the Sebastian area and Florida coast. The photos demonstrate nicely the visibility from the cabin of an XL.

The FAA fly off time was done - it was time for N724X to leave the nest! I resolved to move the plane from Melbourne to a temporary base at Iowa City Municipal (IOW) prior to moving to Albuquerque, New Mexico in the near future. I made one last trip to Orlando, this time only one way. The weekend was spent checking and rechecking everything I could think of and a few I didn't. An oil change revealed no significant metal in the oil filter which was a relief. Finally, everything was tightened, twisted and packed - it was time to go ...

Check out the full story of Rich's "Oshkosh Miracle" on his website.

Here are some excellent pictures of the testing being done out west, courtesy of mojaveskies blog. 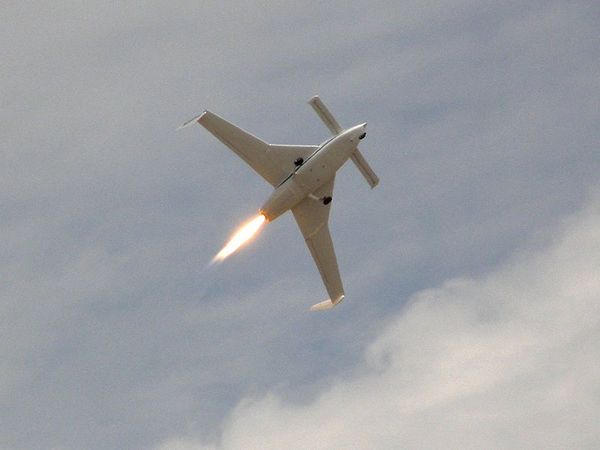 This is a catch all to reduce the "orphaned pages" issue with the Nav Menu on the lefthand side...
| Aircraft | Articles | Documents | For Sale | Weatherbugtest | Velocity Models |
| Current events | Builder's Assistance | Builder's Websites | Builder Tips and Tricks |
| Slideshow | Slideshow2 | Flying |